It’s been 10 days since I visited RTP to take my second attempt at the CCIE lab, and unfortunately the results were not what I had wanted. The result was another failure, and afterwards I was far more emotionally and mentally drained than after my first attempt. I’d felt like I had a good shot at passing this time around, I thought I had hit up my weak areas and would at least see a decent improvement over my first attempt. That was not the case, as my results were worse than the first time around in both TShoot and Config. Diagnostics was still a pass, but honestly, that’s the one area that I didn’t even study for since there’s really no true way to do so.

First off, I don’t want this to come off as a pity party for me, as it shouldn’t be and that’s not why i’m writing this. I think there was a combination of anxiety and stress that I put on myself for the second attempt that I didn’t place on myself for the first, and while that played a part in what transpired, upon reflection it’s become apparent that over the past 5-6 months I’ve put the goal of passing the lab ahead of the journey to get to that point.

When I started working towards my CCIE in July of 2016, I laid out a plan of attack. Read, take notes, test myself on what I’d read, determine what I needed to work on more, repeat until a topic was solidly understood and embedded in my brain. After I passed my written last December, I continued this until around May, when I switched to doing nothing but labbing, with only the occasional continued learning and reminding myself of things. I would go over my notes on occasion, but as time progressed, I found myself focusing on just doing labs. If I didn’t understand something, I wouldn’t go back and read and focus on the fundamentals, I’d just try to make sure I understood it enough so that when I took the lab I could figure it out. For me, that resulted in two failed lab attempts.

I honestly believe that everyone who approaches the lab will have a different method to how they study and learn, and they may need to adapt their approach as time goes on and as the situation changes. I made changes in my approach several times, and this is just the latest one. My new approach is to go through the blueprint again, item by item, and review everything that is on it. Lab it up, make sure I understand not only the how but the why behind things. Dig up more RFC’s, even though they are sometimes like taking a bottle of Ambien. I want to master the topics and not just do “well enough to pass,” but have passing be a byproduct of what I’ve learned. That’s the ultimate goal, and the one that I lost sight of.

It does make me hesitant to approach my next attempt from this perspective, because right now, I don’t know what my timeline for my next lab will be, other than it will need to be before November 13th of 2018, since that’s my 12-month window between labs. I’m very lucky to have such a supportive family in this process, and a boss who has given me so much support in making time for studying and supporting this goal that I’ve felt like I’ve let them down, and that’s been the most difficult part for me at this point. But the only way that I fail at this point is by giving up. By pressing forward after failure to achieve success is the only way to overcome the difficulties that lie in my path. I sound like a Tony Robbins meme right now, but I honestly believe that and will continue to forge through this time.

One last thing I want to share is the scores of my two CCIE attempts. If you’re on this path as well and you hit the same sort of wall as me, don’t think of yourself as a failure if you continue to push forward. The drive to continue to push on, to overcome, to see those failures as motivation to improve yourself, take it and use it. 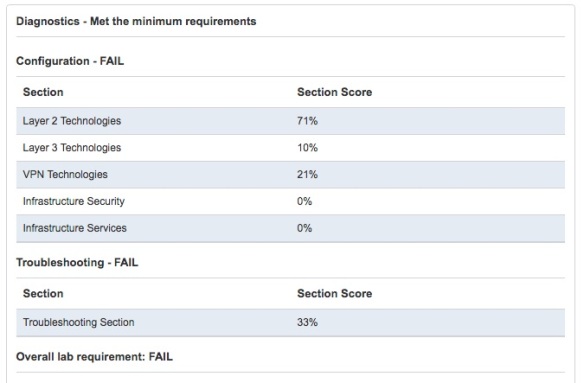 As you can see, there was a significant drop in attempt #2, which led me to this re-evaluation of my approach. I’m hoping to start to add more content to this site in order to document my study process, which will hopefully help to keep me accountable to myself. As far as I know after reading through all of the NDA stuff as well, disclosing these scoring reports doesn’t violate any NDA regarding the lab, but if anyone with Cisco or elsewhere believes it’s in violation, please let me know and I will remove it immediately.