Well, I’ve had numerous comments and discussions with people who indicated that there was another way to enable MPLS on all of the interfaces in the core on my lab. I had planned on touching this in a later post, but since it’s on my mind now, I decided to put this post together to look at MPLS autoconfig.

MPLS LDP autoconfig is a method of allowing the IGP that is configured on the router to automatically enable MPLS LDP on all interfaces that are associated with the routing protocol that is configured on the device. Autoconfig is an option to use with both the OSPF and IS-IS protocols, but for this discussion, we’ll be looking at OSPF specifically.

How things are currently configured:
We currently have LDP configured on a per-interface basis on all of our P/PE routers in the lab. We can verify this by using the ‘show mpls interface <interface> detail’ command: 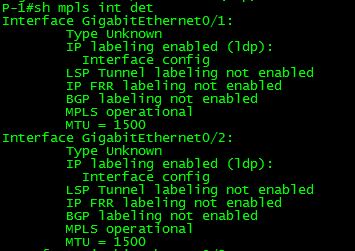 Disabling MPLS on the interfaces
This is a fairly simple process, it just involves going to each of the interfaces and running the ‘no mpls ip‘ command. When this command is run, we can see that LDP goes down on all of our interfaces via a syslog message:

Enabling MPLS autoconfig
Using MPLS autoconfig is something that I can see a place for, but I also personally prefer the granularity that enabling MPLS LDP on a per-interface basis provides. There may be cases in a lab situation, or a real world one, where you do not want LDP to be enabled on all of the same interfaces that your IGP is running on. But if you’re going to be running MPLS on all of the same interfaces that you are running your IGP on in the MPLS core, it makes sense to use autoconfig for the time savings that it gives you when turning up LDP neighborships.

The configuration is very simple, under the OSPF process, simply run the command ‘mpls ldp autoconfig [area <area ID>]‘. If you have a multi-area OSPF process, it’s best to specify the area associated with the interfaces that you are wanting to enable MPLS LDP on. After we run this command, we can see that our LDP neighborships are up again via syslog messages:

If we look at the details for the interfaces now, we can see that there has been a change to how LDP labeling has been enabled on the interface as well:

We can see that the IP labeling enabled (ldp): now indicates that IGP config is what enabled the MPLS LDP on the interface.

We can use the same commands as before to then verify that LDP is no longer enabled on this interface, although the previous syslog messages essentially verify this as well.

Conclusions
Hopefully this helps to show another way to enable LDP interfaces in our MPLS core. I hope to hear more input on these write-ups as I post them. Please, send me any comments or suggestions and I’ll try to touch on them in a future post.